The episode for "Dawn and the Surfer Ghost" was originally released on May 20, 2019 and is Mystery #12. You can listen to it here. This episode is 1:09:48 long.This week's ghostwriter: Ellen Miles.

Previous: BSCMC 011: Claudia and the Mystery at the Museum | Next: BSCMC 013: Mary Anne and the Library Mystery | Or, see all episodes.

Hang ten, Riptide Babies! Your favorite cheeba/Stoppard heads, Weed Lord and Half-Pipe, are back all the way from sunny California! The fog is rolling in and the screamers are out for blood, so ghouls and grommets alike should paddle in, because when the surfer ghost is out to get you, you’re bound to get got. Also, there really wasn’t a B-plot this week, so don’t expect to hear much about one. Party on, Riptide Babies! And don’t forget to save a toke for me! (A toke of drugs, to be clear.)

Tanner's description is from the movie Point Break (1991)[c 1]. Tanner asks if Jack's online handle is because of Point Break, and Jack says no. Jack relates that he will not share the story because of how deeply personal it is.

60-Second Burger Run update: Jack runs out of time and Tanner did so well, making it to level 6. "I was in the zone."

Burn Of The Week

1978 article about truth in fiction by David Lewis[b 1]

Mary Anne goes to answer the phone while the children do dangerous things on balance beams. 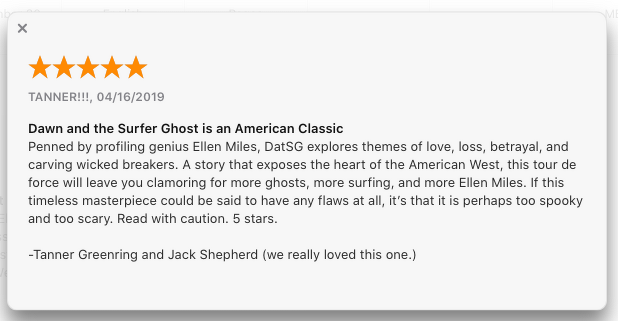 Retrieved from "https://bscc.fandom.com/wiki/BSCMC_012:_Dawn_and_the_Surfer_Ghost?oldid=1951"
Community content is available under CC-BY-SA unless otherwise noted.